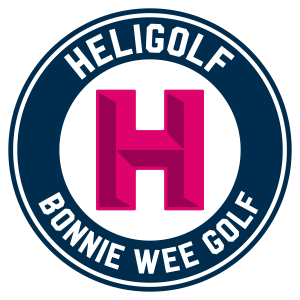 HELiGOLF is undoubtedly the best way to explore golf in Scotland. HELiGOLF allows you to elevate your game and play all those legendary but hard to reach championship golf courses while staying in one location for the duration of your trip.

The south-west coastlines of Scotland are arguably the most beautiful anywhere in the world, so it will come as no surprise there are many first-class links golf courses on these shores. On the mainland in Ayrshire: Prestwick, Royal Troon and Turnberry Ailsa enhance the area by providing a superb Open Championship pedigree. Additionally, across the Firth of Clyde and over the Irish Sea lie more links courses, equal in stature to those in Ayrshire and golfers worldwide travel thousands of miles to play.

Royal County Down and Royal Portrush are the two most iconic courses in Northern Ireland and can be reached in a short hop in a helicopter from Scotland. Meanwhile, Machrihanish, The Machrie and Ardfin are all courses located in remote areas on the Scottish west coast. From Ayrshire by road, travelling to all of these courses requires long drives and /or car ferry rides.

If you like combining golf with Scotch Whisky, then look no further than Islay, Jura and Campbeltown. The isle of Islay where The Machrie is located has no fewer than 8 distilleries including Ardbeg, Lagavulin and Laphroaig. The Isle of Jura, where the wonderful Ardfin Estate has recently been constructed has a world-famous distillery named after the Island. Campbeltown, near the links at Machrihanish, is home to Springbank and Glen Scotia and used to be the Whisky capital of Scotland.

Ordinarily, you would need more than one, and maybe more than two separate trips to play all of these incredible courses. With a HELiGOLF trip, you can play all of these courses in one trip, without even having to change hotel. Only unpacking your bags once and indulging in luxurious Scottish surroundings each evening at The Turnberry Resort.

Turnberry is located perfectly in South Ayrshire, just over an hour from Glasgow airport and this 5-star luxury collection resort can be your home away from home for your entire trip. The Turnberry Resort overlooks The Open Championship Ailsa course on the south Ayrshire coast of Scotland and is one of the most iconic hotels in Scotland. The resort offers luxurious ocean-view bedrooms, luxury lodge accommodation, fine dining options and full Spa facilities.

From the Turnberry Resort, the below golf courses can be reached within 40 minutes. 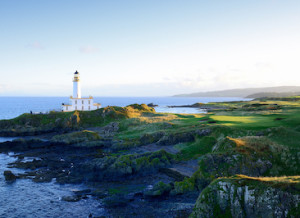 Turnberry Hotel and the championship Ailsa course have recently undergone extensive refurbishment and reopened on the 1st of June 2016. Among the changes is a spectacular conversion of the 9th hole from a par 4 to a par 3 with a new green situated at Turnberry Point. This area of Scotland is steeped in history; long before the game of golf emerged it is thought that Robert the Bruce, King of Scots (b 1274-1329) was born in Turnberry Castle which once stood at the present location of the Turnberry lighthouse. The remains of the castle are visible today.

The first championship held at Turnberry in 1977 has been immortalised as the ‘Duel in the Sun’ when the more junior Tom Watson triumphed by one stroke over runner-up Jack Nicklaus as the amber sun descended in the sky.

Home of the very first Open Championship played in 1860 this golf club was founded in 1851. Old Tom Morris relocated from East to West and was commissioned by Prestwick to create a 12-hole course. He designed, laid out, maintained the course and ran his own golf equipment business selling the new guttie golf ball and clubs. He was instrumental in generating interest for and bringing the Open Championship into existence, striking the very first shot. The course was extended to 18 holes in 1883. The 24th, and final, Championship was held here in 1925 won by Jim Barnes of the USA. Prestwick is regarded as a tight and demanding links course with blind shots, bunkers aplenty, undulating dunes adorned in thick rough and notoriously speedy greens. 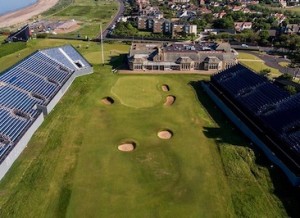 This championship course received Royal patronage in 1978, the club’s centenary year. A traditional ‘out and back’ links course, the track originally consisted of only 5 holes; in 1888 it was extended to 18 with the front 9 running along the shoreline before turning across the dunes and heading back to the clubhouse. The course boasts both the longest and shortest holes in Open Championship golf, the 6th stretching a monstrous 577 yards contrasting with the Postage Stamp 8th hole at just 126 yards, short but far from easy. The existence of plentiful gorse, strategically placed bunkers, and the ever-present weather fronts encourage accurate shot-making to avoid trouble; as such this course is well respected among the champions who have battled it out for glory on its turf. 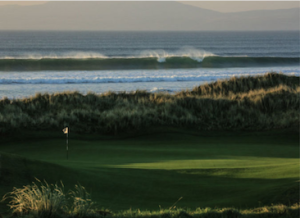 Willie Campbell first designed The Machrie in 1891. At the time he was said to have proclaimed that it was the finest ground for a golf course that he had ever had the pleasure of viewing. The Machrie Links hosted a famous match in 1901 between James Braid, John Henry Taylor and Harry Vardon. The Prize money was £100, reputed to be the largest prize of its kind at that time in the British Isles.

In 2014 under the guidance of Course Architect DJ Russell, work started at The Machrie Links in order to restore the Links to its former glory. The Machrie Links today is one that priorities skill and strategy over power and combines the best from the past with today. 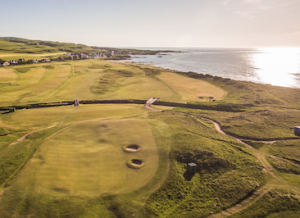 Designed by Old Tom Morris, this seaside championship course is situated at the southern end of the Mull of Kintyre peninsula on the west coast of Scotland. Established in 1876 Old Tom left his mark on the course in 1879 extending a then 12-hole track to 18 holes. Following a prize match in the same year, Old Tom commented on the natural magnificence of Machrihanish expressing that it had been specifically designed by the Almighty for playing golf. The dramatic first hole, requiring a drive across Machrihanish Bay, is frequently described as the best opening hole in the game. There is no question, this is a remote part of Scotland; however, the rewards for making the journey are plentiful. This quiet course with challenges galore, stunning views and abundant wildlife is a gem of a destination. 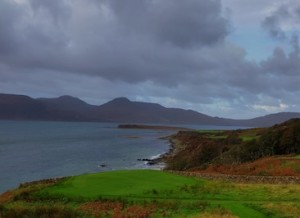 The Ardfin Estate is the latest course in Scotland to earn the curiosity of golfing aficionados worldwide. To date, the course has been unavailable to visiting golfers but this is about to change as a small selection of tee times will become available to those willing to make the journey to this remote Scottish Island.

Bob Harrison designed the course, which is his first project in Scotland. Harrison is an eager admirer of the work of legendary designer Alistair Mackenzie, whose influence is there to see on the course which has been designed along the most rugged of coastlines. Par 72 and 6,800 yards in length, the layout of the course offers golfers a dramatic sea view from every hole. There’s no doubt that Ardfin is the latest ‘must-play’ Scottish golf course. 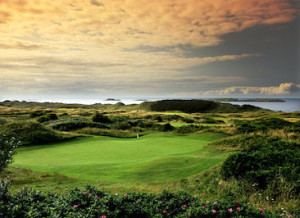 Founded in 1888, designed by Old Tom Morris and redesigned by Harry Colt, Royal Portrush Golf Club is steeped in history and was the first club outside the mainland UK to host The Open Championship, in 1951.

Since its inception, the club has also held a number of high profile amateur and professional tournaments and has recently been added back on to The Open Championship rota as a host venue. The course itself meanders through strongly featured links land and provides golfers with spectacular scenery along clifftops and sand dunes. Once voted Number 12 in the world by Golf Magazine, Royal Portrush is a masterpiece of golf course architecture. 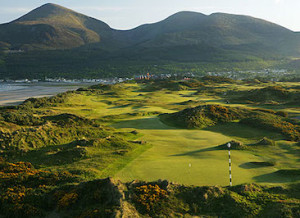 Founded in 1889 by a group of local businessmen, Royal County Down has become known as one of the finest links courses in the world.

Lying at the feet of Slieve Donard Mountain, Royal County Down was opened as a 9-hole course. The club council wasted little time in recruiting the services of Old Tom Morris to design a new nine. Legend has it that Old Tom was to be commissioned for a fee that was to ‘not to exceed 4 pounds’. Due to the superb natural links land available, the full course was ready to play in July of 1890. Bernard Darwin famously noted that Royal County Down boasts “big and glorious carries, nestling greens, entertainingly blind shots, local knowledge and beautiful turf – the kind of golf that people play in their most ecstatic dreams”.

To enquire about your HELiGOLF adventure, contact us on bookings@bonnieweegolf.co.uk